Hurricane Michael was one of the most intense Atlantic hurricanes to hit the United States and the strongest storm on record in the Florida Panhandle, reaching speeds up to 155 mph. As you can imagine, the aftermath of the storm was catastrophic, damaging everything in its path and causing roughly $15 billion in damages.  Verizon Wireless took extreme efforts when they banned together to create “Verizon Wireless’ Hurricane Michael Response Plan- Recover Together”. In partnership with Momentum, Hype’s Brand Ambassadors (two teams of dynamic duos) were traveled down to Florida for 10 weeks to help with the efforts of supporting the community as they worked to rebuild after Hurricane Michael.

During the first two weeks- the team’s mission was to do recon, analyze the affected nine counties and see where the initial need was. In Week 3, both teams volunteered at a weeklong event called “Salvage Santa”. Salvage Santa is a program that is put together by the Police Chief of Panama City.  The police department dedicate their time to fix salvaged bikes from Walmart and gift them to the less fortunate children at Christmas.  Usually the goal is to help around 1,000 children a year but this year (2018) they were able to help over 14,000!  Between weeks 4 through 8 the teams focused on paying it forward at local businesses that were recently affected. The teams ventured out to all nine counties to surprise local restaurants with complete buy outs. For 2 hours, they purchased everyone’s food that came into the restaurant, providing excitement and a great surprise and delight for everyone! 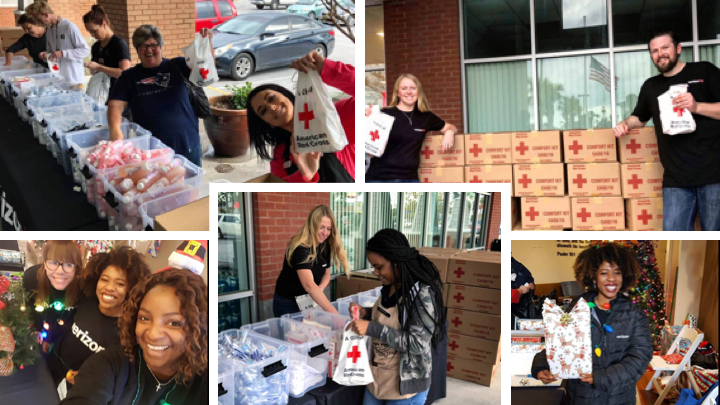 The last 2 weeks included a variety of different volunteer jobs as well as multiple donations that were given unexpectedly to families in need. One event was for Florida Families, where both teams came together and did a wide array of activities from face painting and popping popcorn to buying out a local food truck for donations! At the other event- the team worked at a coat drive for two different organizations: Bethan House and Panama City Rescue Mission.  The teams finished with the task of fulfilling a wish list from Mexico Beach Distribution Center and supplying all the needs. Outside of volunteering, the teams went out to specific hotels to help those in need. One team was able to help 17 displaced families with supplies and gave out $100 gift cards, while the other team set up dinners at 3 hotel properties for displaced families along with gifting them with $100 gift cards!